The ceremony at the British High Commissioner’s official residence on Monday came three months after a nationwide search for two footballing talents who might be able to impress Europe’s best club scouts and academies.

Last December, after they attended a training stint at the Brooke House College Football Academy in Leicestershire and demonstrated their skills at the Nottingham Forest training complex before scouts from top clubs such as Manchester United, Liverpool and Everton, it became clear to Adam and Yusry that Brooke House College would be their destination of choice.

The boys’ two-year scholarship are worth a combined RM1mil and they will continue their studies while training at the academy.

“It’s always a marvellous occasion when we are able to celebrate young talent, and with MDF, I am thrilled to acknowledge and endorse this terrific opportunity and the symbiotic relationship between young Malaysian footballers and one of our greatest British exports: football!

“We can only hope that both Adam and Yusry go on to do wonderful things,” said Treadell.

Nestled in the heart of Leicestershire, the Brooke House College Football Academy will allow Adam and Yusry to take advantage of the world-class facilities and training programmes.

The highly selective academy has more than 70 budding stars aged 12 to 19, who undergo training under the watchful eye of English FA-certified coaches.

Adam and Yusry were overjoyed with the good news and are eager to start the new chapter in their lives.

Yusry, who started playing football at the age of 10, says the training stint in December improved his game and has made him hungry for more.

“The players (in UK) play a much faster game than we do here, so I will try my best to match them. I also want to use this opportunity to improve my English,” said the shy lad from Sarawak.

“We are very proud of Yusry, but we want to see him push himself there and rise to the challenges,” he said.

Adam’s advice to those thinking of giving the MDF programme a shot this year is to “just give it a go because you never know what will happen.”

“Players like Ronaldo and Messi, they had to train hard, work hard and make sacrifices. And if you can show that to the coaches, in this case McMahon, then you have a chance to go far in football, and MDF may give you the opportunity to do that,” Adam said.

“Football is a hotly disputed topic in Malaysia and quite often the talks are negative,” McMahon said.

“Today, we have seen that good things can happen in Malaysian football, and we plan to continue this momentum moving forward.

“I’ve seen young footballers from all over the world, and these two boys more than deserve this wonderful chance at making the big-time!” he said, hoping to see the same positive attitude seen in Yusry and Adam at this year’s edition of MDF.

“Football is not just about being a footballer. It is also about having life skills and education, which is such a big part of life in this day and age. It is why education fits perfectly with this football programme,” the Liverpool legend noted.

De Kretser said the combined opportunity of getting an education with one of the top football academies as well as with the colleges in the UK really couldn’t get any better for the two youngsters.

“They are at an age now where they will find out whether they will make it or not in football, but what a privilege and brilliant opportunity it is for them. We wish them the best.

MDF is set for a dramatic return this year with a variety of new destinations, additional age brackets, new celebrity coaches and a whole lot more.

The programme will be launched in June and interested participants can check out its Facebook page at www.fb.com/milliondollarfeet.

MDF is presented by Brickfields Asia College, and sponsored by New Balance, Kenny Rogers Roasters, 100 Plus, LAC Packaging and Printing Press, and Anita Gift and Souvenir in support of EduNation. 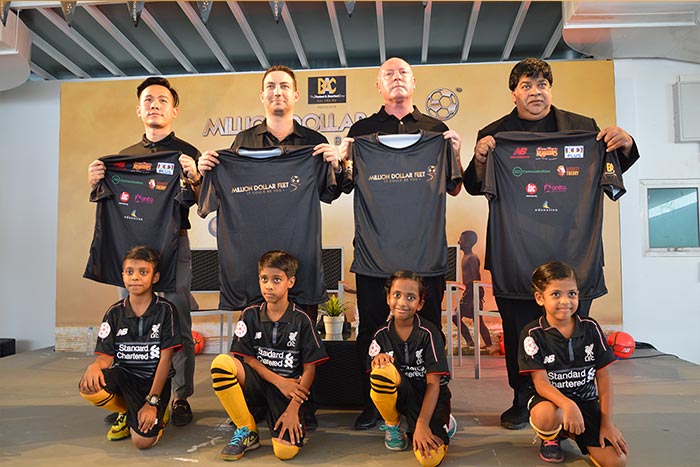