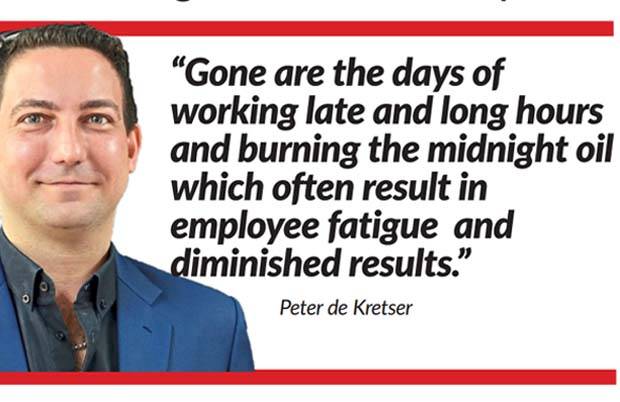 To achieve this goal, among others, the agency has decided to go against the norm and cut its working hours to spruce up productivity and work-life balance.

He told StarBiz: “At GO, we are fortunate to have a truly dynamic work culture and ethic, which, among others, promotes a strong work-life balance. Happy employees are naturally more productive employees.

“More than merely preaching a strong work-life balance, we see it as our responsibility to put words into action. Of course, there’s no secret that this is also designed as a team retention and attraction mechanism, while encouraging greater productivity.”

“Today’s digitally and technology-empowered world has brought about so much potential for increase in efficiency and productivity.”

This, de Kretser said, should naturally require a paradigm shift in the way the agency does its business. He added that there is a need to constantly evolve while boosting productivity in this era of technology while empowering colleagues to utilise their time more effectively towards improved results.

“Gone are the days of working late and long hours and burning the midnight oil, which often result in employee fatigue and diminished results, ” he explained.

While not common in Malaysia, few companies around the world today have cut their work week, finding that it leads to higher productivity, more motivated staff and less burnout.

He described the move to cut the working hours as a calculated strategy based on research and results. “Variations of the shorter work week have worked for a number of companies in Europe, the United States, New Zealand and Japan to superb effect.”

“Much like American industrialist and business magnate Henry Ford during his time, we strongly believe this is a very progressive move which will lead to better results. We could very well be the first agency in Malaysia or even the region to implement a 4.5-day work week but I’ll bet it won’t be long before more companies here implement similar changes, ” de Kretser added.

Henry Ford introduced the 40-hour work week (“9 to 5”, five days a week) for employees of his Ford Motor Company in 1914, back when working 12-hours a day, six days a week was the norm.

It was nothing short of revolutionary as his inclination about improving productivity was spot on.

Profits for the Ford Motor Co doubled in two years. It was not long before other companies noticed and followed suit. GO Communications, consistently rated among the top PR and communications agencies in Malaysia and the region, would be slashing its work week by half a day from five days to 4.5 days. Effective this month, it would observe official working hours from 9am to 1pm every Friday.

Meanwhile, other terms such as employee salary and working hours from Monday to Thursday (9am to 6pm) would remain unchanged.

This essentially translates to employees still being paid a full five-days-a-week salary while their working hours would be shortened by at least two days per month and 26 days a year, which is akin to a 10% pay rise and 624 additional hours for the agency’s staff.

This is not the first time GO Communications has made bold and radical moves to promote a happy work culture. In 2018, the company flew its entire staff to Shanghai, China for a 4D3N holiday to visit the happiest place on earth – Disneyland.

GO’s team members are also regularly engaged with monthly social and club activities, among other initiatives to benefit employees.

So while Disneyland may hold the title of the happiest place on earth, it certainly does look like GO Communications is gearing up to be perhaps the happiest workplace in the country.